Taste from Greek livestock farming in Thessaly and TYRAS plant, member of the Hellenic Dairy S.A. Group and one of the biggest feta producers in Greece, had the opportunity to get British viewers through the special BBC tribute that was broadcast on the station's newscast on Friday, April 12 2019.

This is the report that the British TV channel made last month in Trikala, Greece with its own crew, regarding BREXIT and the impact it will have on the economy of their country.

The visit of the British to the city of Thessaly arose when the news agency chose to make a tribute to a well-known British ready-to-serve food business for large supermarket chains, asking to include one of its main suppliers, TYRAS.

In TYRAS, produced the Olympus Feta Cheese, which is well known abroad and especially popular in Great Britain.

The shootings took place on 7 and 8 March at the dairy plant as well as in a collaborating farm at Agios Vissarion in Pili. Plans were also taken in the Meteora region.

Alastair Fee was reported by Pete Doherty as cameraman.

It is worth noting that the BBC newsletter is attended by more than 7 million viewers. 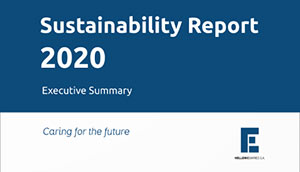